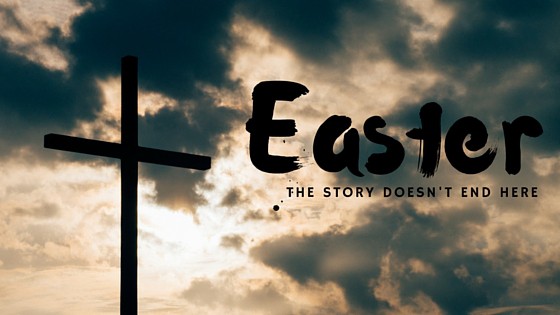 It’s so easy to forget.

Easy to get complacent and become distracted.

So easy to take the truth of Easter for granted.

We can get so caught up in arguments over whether we should be buying chocolate eggs, whether the name “Easter” should be used at all or what would make the best #SundaySetlist for Easter day that we sometimes forget the amazing truth revealed in the Easter story.

The first Easter was not the result of a slapdash plan to get us back on track.

Easter was not, as one author put it, an incident of cosmic child abuse.

The first Easter was the culmination of a plan that was set in motion thousands of years before Jesus’ death by a God who loves us so much that He would do anything to win us back.

In the book of Genesis we see the account of the relationship God had with humanity.  He walked with us and spoke to us and loved spending time with us.

He tended the soil with us and made plants grow that we could harvest and eat.

He kept us safe from disease, from illness and from sickness.

But we, in our infinite wisdom, chose to take our own path, away from Him.

We chose to do things in our own strength.

Choosing independence over relationship, we told God we wanted out.

And so, ever loving, He didn’t stop us.

He allowed us to follow the path we had chosen for ourselves.

The path of Independence.

On this path He did not tend the soil.

He did not provide pain relief.

He did not stop sickness and disease.

These things were now down to us because we chose independence.

We no longer wanted Him to do this as we believed we could be as good as God.

He never stopped loving us.

Not for a single moment.

In the story of Adam and Eve, as they are leaving the garden, God gives them clothing made of animal skin.

While many recognise this as a prophetic act, symbolic of the fact that blood would have to be shed to cover over our shame, I see this as more than that.

This was the loving act of a Father saying to His children:

“I won’t stop you leaving, but if you must go, wear a coat, it’s cold out there…”

From that moment on, God did everything He could to show us that we were not on the right path.

He was desperate to show us that, unless we were willing to accept that this path we had chosen would not take us back to Him, we would be lost forever.

You see, He knew where our chosen path would lead us.

So, God put up the warning signs…

From the ten commandments to the laws on what can and cannot be eaten to the laws on how to live, how to sacrifice and how to celebrate holy festivals.

No human could possibly reach or maintain that standard and yet that is exactly what we were trying to do.

It wasn’t that He was making it harder than necessary, He simply needed us to know that returning to the path where we could walk in relationship with Him was not something that could be achieved through the things we do.

There is no Divine Karma.

There is no salvation through works.

All God wants is for us to know His love, accept it and love Him back.

To love Him because He first loved us.

But to do this we would have to relinquish our independence.

And so He came to Earth as His son Jesus.

Jesus who did no wrong.

Jesus who, unlike us, did not choose a path separate to the Father.

Jesus who deserved no punishment.

Jesus who on Good Friday was held aloft for all to see.

The hands that had once flung stars into space, now bloodied, wounded and nailed to the rough wooden beams of a Roman cross.

Jesus, the King of the Universe, adorned, not with a crown of gold, but  a crown of thorns, cutting through flesh that did not deserve to bleed.

On that day, Jesus died.

And in doing so, He showed us where our path was leading so that we might turn back.

He took our punishment so that we would not have to.

As He died, the temple curtain that separated humanity from the Presence of God was torn in two.

In His death, Jesus had made a way.

He carved a path back to The Father.

And it had cost Him everything.

But the story doesn’t end there…

Three days later, on that first Easter morning, Jesus defeated the powers of death and darkness and He was raised from the dead, never to die again.

In doing so He showed us both options.

In His death He showed us where our path was leading, so that we might turn away.

There is only one path that leads to life, and we were not on it.

In His resurrection He showed us the way back to life.

And now he stands on that path and calls us, beckoning us to come follow Him.

He asks us to trust Him, to put our faith in Him and to follow because His path leads to life.

So, this Easter, take a moment to remember the sacrifice of love that made a way for you to return to the loving arms of the Father.

Remember that from the dawn of time, God put a plan in place to win you back.

A plan to save you from the path you were on.

And if you are not yet a christian but you would like to take this opportunity to choose the path that leads to life, please take a moment to pray this prayer:

Dear God.  I realise that I have been walking my own path, believing that I did not need you, that I could live independently from you.  I know now that this has led me to do things and say things that have been selfish, unkind and hurtful, even when I didn’t mean to be that way.

Thank you that you love me enough that you were willing to sacrifice yourself to make a way for me to come back.  I know I did nothing to deserve that and I am so grateful for that.  From this moment on, I want to follow you and walk the path that you have made.

I want to follow you on the path that leads to life.  So, Lord Jesus, please come into my life and help me follow the path you have made for me.  Amen

If you have prayed that prayer, whether it be for the first time or for the 1000th time, please let me know by emailing [email protected] so that I can support you on your journey and help you get in touch with a church local to you that can support you and help you learn more about our amazing God that loves us so much more than we can possibly imagine.