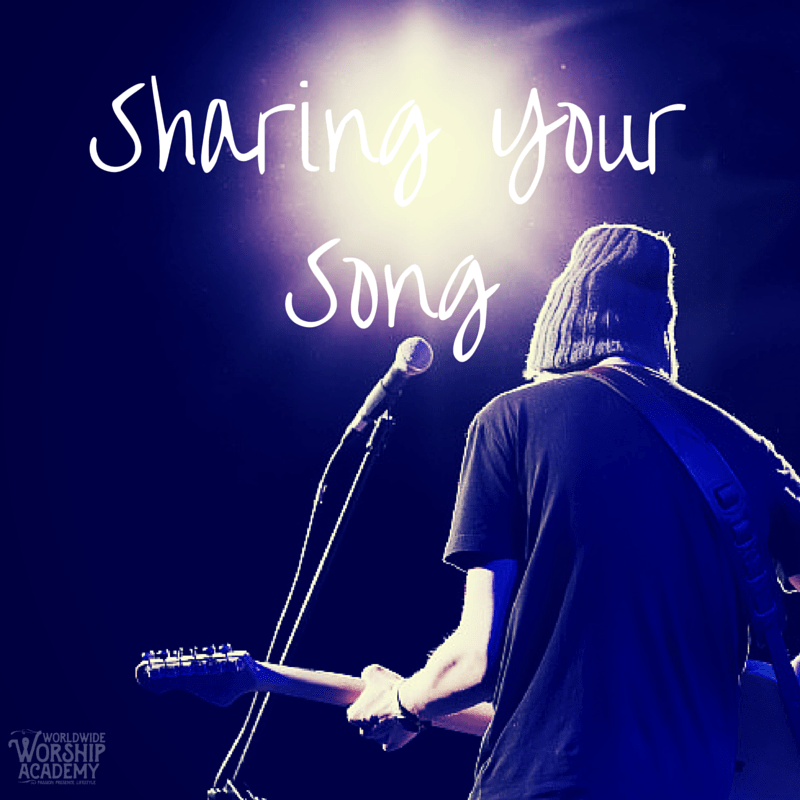 Sharing your song with the world…

Sharing Your Song with the World

As a creative Being, God made us in His image.  He imbued us with His characteristics, with his personality, with His love and with his creativity.

For many of us, the creativity overflows in the form of song.

We have been given the gift of writing poetry, lyrics and melodies that give the church words to use and songs to sing.  We have been blessed with the gift of helping others glorify God.

Often, however, we inadvertently end up burying our talents, hiding our songs away.

We put our songs on public forums for feedback and no one comments because our iPhone recording of our song is just not the same standard as some of the demos by more technically skilled songwriters.

We find that the band simply can’t learn our songs because we can’t send them a decent recording before Sunday morning.

We end up doubting ourselves and eventually give up on ever having our songs sung in church.

Deep down you know, however, that your instrumental proficiency is not a measure of your song writing capability.  You know you don’t have to be a professional musician to be able to be a great songwriter.

And you know that the songs you have written could truly bless other people and help them in their walk with God.

I had the same problem.

My skills as a multi-instrumentalist are pretty poor.  I can play acoustic guitar, but put an electric in my hand and suddenly any skills I have seem to vanish… (I am working on this!)

The same can be said about my bass playing and I can’t even begin to describe how pointless my drumming is.

Ultimately, when trying to record demos of my songs to share with other people I would have to rely on drum loops and synthesised bass lines.  My recordings were not of a great standard and consequently I felt like often I simply could not share them with anyone but my closest friends and family.

Recently, however, a friend, Matt, got in touch and told me that he was starting a new business.

Matt is a multi-instrumentalist, mix engineer and producer. He has a first-class Music Degree and plays keys, drums and guitars. He used to be a full-time Worship Pastor, and in that capacity he became an experienced songwriter.  He is a founding member of RESOUNDworship.org a group that write songs for the local church to sing. (As an aside, if you want to check out a great resource site for new songs, do head over to their site.  There are some great songs on there.)

Matt told me that his new venture was a resource for songwriters who may not have the musical capability, the singing voice or the know-how to record high quality versions of their songs to share with friends, band members or for general release.  He would offer to record the songs for them.

And so, WorshipSongRecording.com was born.

Matt offered to record one of my songs so that he could use it on the website as a demo of what he does so I took a risk and sent him my song “All Around Me Now”.

I sent him a chord sheet and a rough recording of me singing the song at church.  (It was just a recording from the sound desk, so was not that great a quality…)

I was completely blown away by the result.

It took him about 6 weeks to get the song back to me, but this was because he was busy winding down his last, job, building the website, setting up the business, but I am reliably informed that normally it would take less than two weeks to get a pro level recording back.

Here’s the final version he sent through:

He took a rough recording of a song I had written and recorded a completely professional version that could easily be shared with people, sent to the band to learn or simply given to people for feedback.

So, if you’re in a position where you have written some great congregational worship songs and you know they’re finished but you don’t have time, capability or the equipment to record a professional sounding version of your song, then definitely head over to WorshipSongRecording.com and check out what Matt and his team can offer.

If you’re not quite at the point where you feel like your songs are finished, or you want a proven method that will help you take your song from original idea to being used in church then please grab a copy of my Worship Song Roadmap.

God has given you a gift.

P.S:  If you enjoyed the song or want to see the chord sheet I sent through, then please click here to download it.