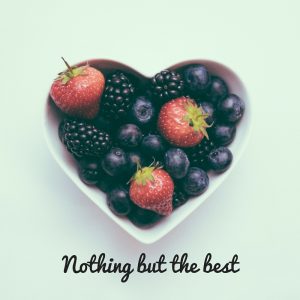 Nothing but the best…

Nothing But The Best

I was sat drinking coffee at the dining room table yesterday as my three youngest were busy doing what they do in the mornings.

(You know, a less than quiet mixture of watching tv, arguing over who should hold the remote and all trying to stroke the same dog at the same time…)

On the table in front of me was a wedding invitation.

My friend, Sarah*, had invited me to her wedding.  She will be marrying her girlfriend, Teri* in a few short weeks.

My 11 year old, Miriam, came over and started reading the invitation:

“Sarah and Teri…” (I could see her mind connecting the dots…) “Is Teri a boy’s name?”

Miriam’s face screwed up as she said the first thing that came to her head:

Being only 11, she was simply expressing her unfiltered thoughts, in the way that only a child can.

I encourage my children to form their own opinions about different situations/beliefs so long as they can explain why they have reached their conclusions.

“Why is it weird?” I asked her gently, as Naomi, her 9 year old sister came to join the conversation.

I continued, “Why is it wrong?”

Miriam shrugged her shoulders: “I don’t know.  Because they’re both girls?”

“How would you feel,” I asked “if you loved someone with all your heart and someone told you it was wrong? That it was weird and wrong?”

Again, Miriam simply shrugged her shoulders.  “I wouldn’t like it.” She admitted.

“What do you think Jesus would say to Sarah and Teri?”

Turning to her sister, I asked the same question:

“Naomi, what do you think Jesus would say to Sarah and Teri?”

There was only a slight pause and then, my Adele-loving 9 year old opened her mouth and sang a single line from the song “Someone like you”:

“I want nothing but the best for you!”

She had hit the nail on the head.

I had to look away as that simple truth, expressed so beautifully, brought tears to my eyes (and no little girl wants to see her daddy cry!)

But that really is the simple truth.

Jesus wants nothing but the best for every one of us because He loves us.

Whether you are gay or straight, rich or poor, old or young, all He wants is the best for you.

And He loves you.

Just the way you are.

*names have been changed in the interest of privacy.